Craig Henry PLC is pleased that the District Court for the Western District of Kentucky recognized the troubling issues apparent in the “Bar Bureaucracy’s” treatment of our client, Jane Doe, and the mental health disabilities raised in her lawsuit against the 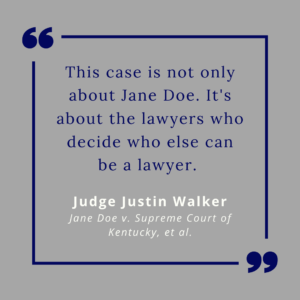 Kentucky Board of Bar Examiners, KYLAP and other Bar entities. Despite recognizing these issues, Judge Justin Walker’s decision dismissed Doe’s claims, finding that she lacked standing to raise some claims and that the Bar had immunity with respect to others.

Despite the loss, our client and attorneys and law students across the state are vindicated by the decision itself. As Judge Walker correctly points out, the “Bar Bureaucracy” repeatedly interrogated Jane Doe about her mental health, inappropriately discussed her application in the presence of other applicants, denied her an unconditional license to practice law for more than two years, and placed wholly unreasonable administrative and financial burdens on her, burdens that were not placed on applicants who did not disclose a mental illness. And we agree wholeheartedly with Judge Walker’s finding that the Bar Bureaucracy’s “medieval approach to mental health…is as cruel as it is counterproductive.”

In perhaps his most striking condemnation of the Bar Bureaucracy’s cruelty in this case, Judge Walker likens the Defendants to a legal cartel, reminding the parties involved that in any cartel, “those who are already selling something get to decide who else may sell that same thing.” In this case, lawyers are preventing those they deem unacceptable from practicing law in the Commonwealth of Kentucky.

Nearly 40% of law school students will experience depression before they graduate. And in Kentucky alone, at least 15 lawyers have committed suicide since 2010. Aspiring lawyers and those already practicing should be able to obtain any and all necessary healthcare, but as long as standards-bearing organizations like the Bar continue to punish those who seek help and professional care, many won’t. And, as Judge Walker notes, “one day, a law student will die after choosing self-help over medical care” in fear that it will eventually be held against them.

Seeking and receiving appropriate and necessary mental healthcare in no way hinders an attorney’s ability to be a fierce advocate for their clients. While this decision was handcuffed by administrative issues and couldn’t go far enough in reprimanding the Bar Bureaucracy for its abhorrent treatment of our client, we hope that this case and future cases like it will protect other attorneys from the abuse suffered by Jane Doe at the hands of these administrators.

If you are a law student planning to apply for the Bar and are concerned about potential discrimination on the basis of mental health or mental illness, please contact Craig Henry PLC at (502) 614-5962.

Get Your Free Case Evaluation